Thats really great to hear from my friends, that they have started a New Free Desktop Security Software Company, which I thought should share this good news / information with you. Also as a first phase, one of my friend who is a flash games expert has uploaded a free online flash game till their free internet security software products get ready. Hopefully the first product would be released in about 6 - 8 Months time. And right now this free game is hosted at zapak.com by my friend, and now it can be played in safescribble website too :). I enjoyed the game and you?

You know why the name safescribble? - The answer said is "We scribble the programming code, to protect your PC". Isn't it great. Also our guys are looking at some people who has an aim to design a worthy software to give it to computer users for free. If you would like to contribute your hardwork, software then mail them at info@safescribble.com. (Honestly we don't want your money but your support).

Computer Worm – Downadup, Kido or Conficker infects millions of system, Here’s the Solution for you...

A computer worm Kido also known as downup, Downadup and even Conficker, has been exploiting millions of systems. This vulnerability affects Microsoft Windows Server Services. The major impact was on Windows 2000, Windows XP, Windows Vista, Windows 2003, Windows Server 2008 operating systems. This small piece of malware has created an bigger infection globally infect 9+ millions of computers. This worm enters into the system via internet, or even via removable drives which is already been infected. This worm also arrives via email attachments. So it’s always good to scan your email messages and also run a periodic scan to your computer to kill such kind of viruses and worms.
Coming back to the title this Downadup worm once start infecting the system drops multiple files and registry entries including its own entries. This also makes entries in possibly vulnerable i.e. have security holes and gets in to malicious components in the system. AS it makes registry entries it automatically starts running in every system start-up. You many ask question what does this infection cause? The answer is it does use its own SMTP i.e. Simple Mail Transfer Protocol, which is used to send emails. This worm once infects the system, and the user uses the system to send an email, it sends an attachment along with the mail which contains this worm to infect the recipient PC too. The main target of this worm is the windows operation system and its address book.
The real sign is that though the companies which have got strict security policies and procedure followed in their organisations fail to update the security patches. So such companies which has failed to update its security patches in its server – the worm uses the hole, we term as vulnerability and gets in to the system to infect the server. Being an organisation, it is connected to multiple computers and each user may send emails to other companies which they do business with. If the receiver of the mail has got a proper security patch he is saved, else his network also would be infected.
The some top antivirus companies such as Kaspersky, Trend Micro, K7 Computing Internet Security Solutions and many more has come with their solution to protect the infected system and kill the worm in your system if infected. If you would like to download a free tool to remove the worm from your infected system, Click “Downadup, Kido, Conficker Remover Free Tool” for free download.
Also update your computer with the latest security patches, so that you and your system can be protected from such kind of internet threats. Download your Microsoft Security Patch from http://www.microsoft.com/security/portal/Entry.aspx to protect your Computer from Downadup/Conficker.
at January 23, 2009

All About Security and eCommerce - A New Blog by K7 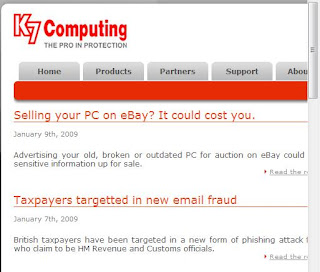 Just wanted to share with you that we have launched our Company's new website and also have started a blog which discusses on the general Ecommerce, and Internet Security Stuff - You can visit - http://blog.k7computing.com/ . We expect your valuable feeback.
Buy Internet Security Software Now!
at January 12, 2009